Eynsford Concert Band and the Band of the Grenadier Guards raise £18,000 for SSAFA

On 22nd November, Eynsford Concert Band and the Band of the Grenadier Guards came together to perform at the spectacular Pamoja Hall in Sevenoaks, Kent.  This was our third liaison and, yet again, the concert was a sell out.

Over the three years, these concerts have raised almost £18,000 in support of SSAFA, the Armed Forces charity that supports the members, ex-members and families of the Armed Forces who find themselves in need.

Raising this amount is an incredible achievement that has only been possible through the popularity and enthusiasm that the concerts have generated and the generosity of the friends, families and special guests that have attended them.

Tonight’s concert was entitled ‘For Queen and Country’, showcasing the pomp and ceremony of our great nation. 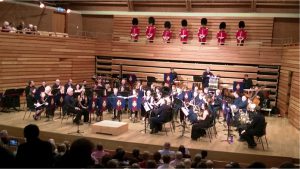 Eynsford Concert Band (conducted by Mike Smith) opened the evening with ‘Procession of the Nobles’ by Nikolai Rimsky-Korsakov, where, as in previous concerts, we were augmented by the Grenadiers’ brilliant fanfare trumpeters, who added another level of intensity to the performance.

We continued with ‘La Mezquita de Cordoba’; a descriptive piece, which follows the history of the Mosque in Cordoba through the ages.  We first performed this stunning piece at the National Wind Band Symposium, in the Gala concert which marked the end of our year as National Wind Band Champions.

We concluded our set with ‘Bond…James Bond’; a selection of themes from the films and providing a tenuous link with the Olympic Games opening sketch featuring The Queen and 007.

The band of the Grenadier Guards (conducted by Major Kevin Smith) opening their performance with the fanfare ‘State Occasion’.  This was followed by the fantastic ‘Symphonic Animations’ which featured a number of solo and group performances of well known animated film themes.  A wonderful Oboe solo performance of ‘The Watermill’ by Lance Corporaal Peter Batai and Walton’s ‘Spitfire Prelude’ concluded the first half. 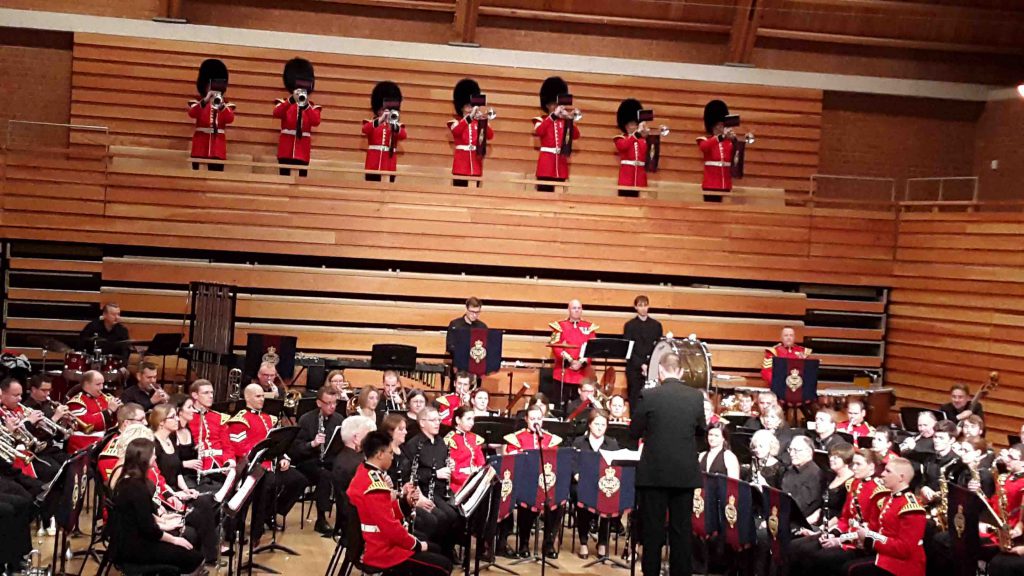 The second half was a spectacular joint performance, with both bands performing to the highest standard; captivating our audience.  With nearly 100 musicians on stage, the massed bands of Eynsford Concert Band and the Band of the Grenadier Guards is impressive, both in sight and in the sound they produce.

Once again, the fanfare trumpets were in evidence in ‘Vivat Regina’, and the programme continued in patriotic style.

‘Here’s a Health’ by Wiffin and Philip Sparke’s ‘Albion Heritage’ followed.  I was then pleased to duet with Lance Corporal Peter Batai, in Handel’s ‘Entrance of the Queen of Sheba’.  It isn’t every day one gets a chance to play a baroque classic with a world class body-builder, and I think we gave a memorable performance.

A performance of Queen’s ‘Bohemian Rhapsody’, followed by Holst’s ‘Jupiter’ ably demonstrated the range of repertoire possible with a massed band of 100 players.  The concert finale included the Ladies of the audience singing along to ‘Jerusalem’ and rousing performances of ‘Pomp & Circumstance March No1’, the ‘SSAFA March’ and the ‘British Grenadiers March’ brought the evening to a spectacular close – a fitting tribute to SSAFA and the serving and fallen members of our Armed forces. 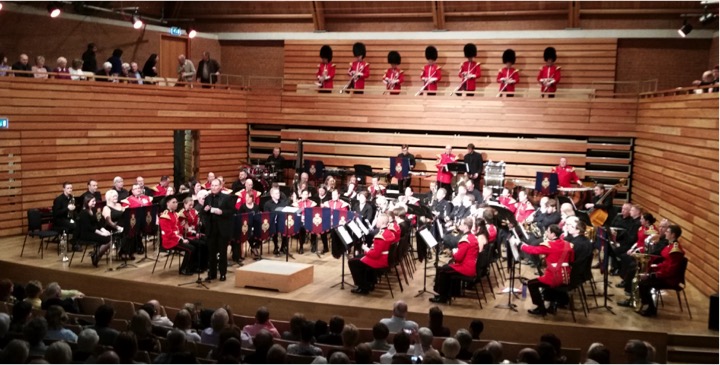 I think I can safely say that both bands are extremely proud of the contribution that we have been able to make to SSAFA and the armed forces personnel and families that they support.  We are also proud of the friendship and strong bonds that have been built between the two bands over the past three years.

Our thanks go to Mike Smith and Major Kevin Davies for their enthusiasm, professionalism and humour in bringing us together and for making the concert such a success.  Our sincere thanks go also to Neil Crabtree from SSAFA and to the staff at the Pamoja Hall for all of their continued hard work in helping organise the event. 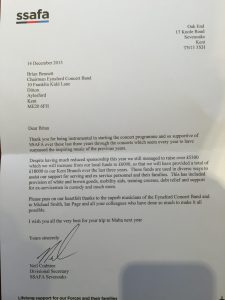 Read more about SSAFA and the support that they provide

Read more about The Band of the Grenadier Guards