On Sunday 11th May 2013, Eynsford Concert Band bought a slice of the US of A to the Mick Jagger Centre on Sunday with with “Americana” – a programme of music inspired by, or written by Americans.

The band were delighted to welcome, not one but, two conductors to the stage – our Musical Director, Mike Smith and Conductor Laureate, John Hutchins.

Both contributed superbly to the evening – Mike shared his extensive insight into the repertoire, whilst John told some terrible jokes.. 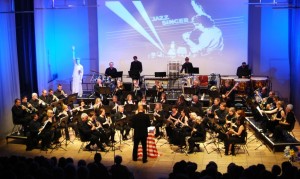 The concert was very well received and enjoyed by all.   As you can see from the pictures above, we even invited two special American guests to participate (look out for the additional member of the percussion section and Bill Clinton on clarinet).