We are very pleased to announce that the Eynsford Concert Band were the winners of the National Concert Band Symposium 2014 – a competition featuring some of the finest wind ensembles in the country.

Founded in 2013 the National Concert Band Symposium (NCBS) is an organisation that aims to bring the very best of concert band and wind orchestra music to the widest possible audiences. Its inaugural annual event was held at in the Colyer Fergusson Building at the University of Kent in Canterbury on July 5th and featured discussions, workshops and masterclasses led by some of the leading figures in the concert band world, culminating in a concert with the Central Band of the RAF, the Kew Wind Orchestra and soloist Philip Cobb (principal trumpet of the London Symphony Orchestra). 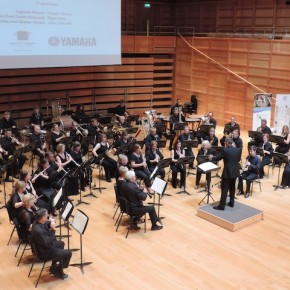 At the heart of the event was a contest, bringing together some of the best wind ensembles in the country (the only competition of its kind in the UK). Each band was given 30 minutes to present a programme of music that would showcase its technical skills and abilities, with performances adjudicated by a panel of 3 world class musicians led by the renowned composer, Johan de Meij, who flew over from the US for the event. 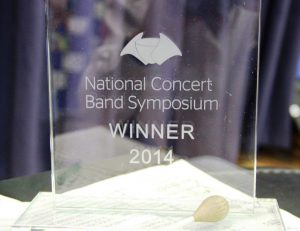 The standard of the competition was very high, so the band were delighted to hear themselves announced as winners at the evening gala concert. The written adjudication was highly positive:

The title came with a trophy and £2,000 prize, sponsored by Buffet, to be spent on musical instruments. In addition the band’s percussion section were also pleased to pick up a special sectional award and a further £200. 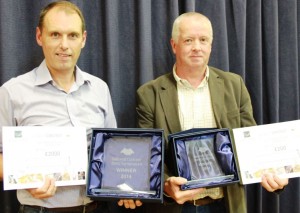