A Joint Concert with The Band of the Grenadier Guards

On Sunday 27th October 2013, Eynsford Concert Band and The Band of the Grenadier Guards performed to a packed audience at the Pamoja Hall in Sevenoaks, Kent.

This ‘Bond of Friendship’ charity concert, kindly sponsored by BAE Systems, was a tribute to our armed forces and in support of SSAFA, the Soldiers, Sailors, Airmen and Families Association.  In the audience were Lord & Lady Astor, Lord & Lady De L’lsle, Councillor Trudy Dean and many other local dignitaries including our very own Conductor Laureate, John Hutchins.

The idea for this joint concert first began back in September 2012 when Captain Mike Smith became our Musical Director.  At that time, Mike was also the Director of Music to the Band of the Grenadier Guards so this seemed the perfect match.

So, almost a year after the idea was first born we gathered at Pamoja Hall for our first joint rehearsal.  We were thrilled that we were to perform with The Grens but also a little apprehensive, hoping that we would perform professionally and to our highest standard.  The Grens arrived (in combat uniform) while we were rehearsing our first half pieces and I think it is safe to say that their arrival caused quite a stir…particularly amongst us ladies! 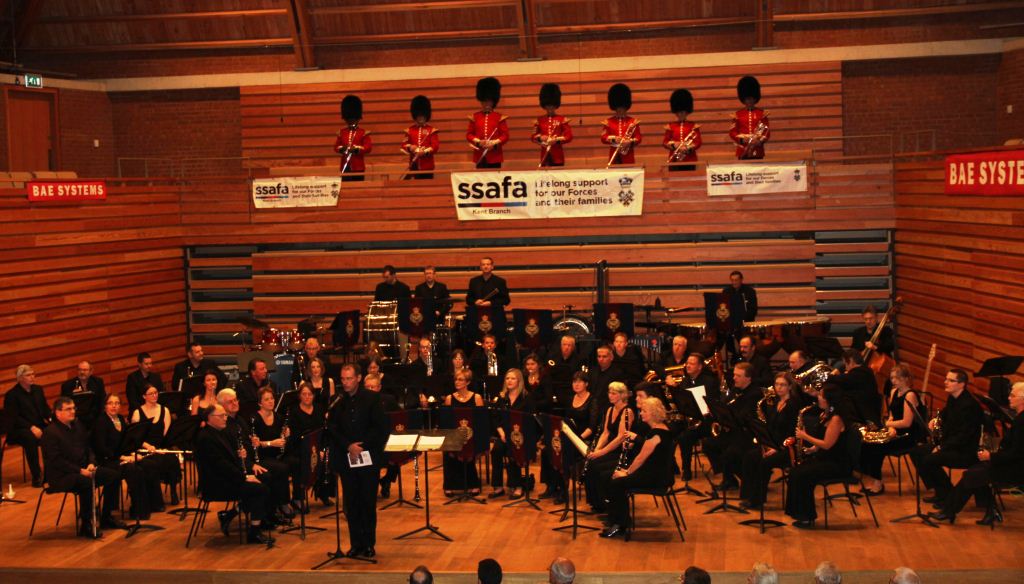 Eynsford Concert Band opened the evening’s program, joined by a Fanfare of seven trumpets from The Grenadier Guards standing on the balcony behind us.  Resplendent in their full ceremonial dress and bearskins, it was a performance of the National Anthem, quickly followed by Statham’s ‘Great and Glorious’ that clearly set the tone for an unprecedented evening of music ahead.

Eynsford Concert Band completed their set with Reed’s ‘Festive Overture’ and a selection from ‘West Side Story’.  Major Kevin Davies then picked up the baton for The Band of the Grenadier

Guards who closed out the first half with four pieces that included Saint-Saens ‘March Militaire Francoise’ and Chaminade’s ‘Concertino’ that featured soloist Dawid Venter on Flute.

The second half of the concert proved to be a massed band spectacular.  Our two bands combined on stage to play a varied program of music which included the beautiful ‘Hymn to the Fallen’, by John Williams and Irving Berlin’s ‘Showstoppers’.  A special trombone feature, Sharpe’s ‘Blades of Toledo’, showed off the talents of the combined trombone section while Graham’s ‘Cossack Fire Dance’ featured the talents of five soloists from The Grenadiers on clarinet, trombone, euphonium,trumpet and xylophone with performances that were absolutely breathtaking.

Our Finale was William Walton’s rousing ‘Crown Imperial’ that, with over 80 musicians on stage, was both very moving and extremely loud!  The concert finished with the Service Marches and the March of the British Grenadiers.

We’d like to say a special thank you to Neil Crabtree from SSAFA for his help in organising the concert.  It was an amazing evening enjoyed by the audience and bands alike, and an honour and privilege for us to share the stage with The Band of the Grenadier Guards.  It is a memory that we will treasure for many years to come.

Can I pass on my thanks to you and all members of your band. Not only was it enjoyable to share the stage with such a high quality band, I can safely say it’s been many a year since we have been hosted so well.

From the warm welcome to the fine evening meal it all helps to get the band in the right frame of mind to perform at their best, something a lot of people fail to realise.  The whole evening went well in a relaxed atmosphere with good music and hopefully we have raised a good amount of money for the charity.

We will look and see if there is any possibility of either a visit to Wellington Barracks or a return concert next year.  All the best with your remaining engagements this year and many thanks for the kind gifts of the CDs.

Many thanks for your kind words following the success of the concert last Sunday. I know Woody has already responded with his words of appreciation.

Thank you for hosting both the band and me so well.  Your band was extremely willing and professional and it made the reality of putting on a concert that was able to please both the audience and challenge the two bands a reality and extreme pleasure.

Please pass on my appreciation to all band members for their fabulous performance at last night’s concert.  They did themselves proud and I am still on a musical high this morning.  The feedback I received from the Grenadiers Band has been excellent with many comments on the bands professionalism and great sound and stating that they really would look forward to doing something similar again in the not too distant future.

Brian, much of the success of the evening was down to your hard work and effort behind the scenes ensuring that everything, with the exception of my music being on the stand, ran like clockwork.  Many thanks.