Eynsford Concert Band and the Band of the Grenadier Guards raise £8,000 for ABF – The Soldiers’ Charity!

Eynsford Concert Band and the Band of the Grenadier Guards raise £8,000 for ABF – The Soldiers’ Charity!

It was our great pleasure to perform with the Band of the Grenadier Guards on 5th November 2017 at Pamoja Hall and to help raise an incredible £8,000 in support of ABF – The Soldiers’ Charity in one very special evening.

The ABF give a lifetime of support to soldiers and veterans from the British Army, and their immediate families, when they are in need. The concert, fittingly titled ‘Lest we forget’ in remembrance of those that have fallen in the line of duty.

The concert opened with the Band of the Grenadier Guards who performed five pieces in the first half.  One most memorable piece was Otto Schwartzs’ “The Story of Anne Frank”.  This was an inspiring and moving piece, which included a striking violin solo played beautifully by Warrant Officer, Sarah Marinescu.  By contrast, a little light music by Naulais where another soloist, Lance Corporal David Wong impressed the audience with his smooth playing in “Flamme & Co”.

Next up, Eynsford Concert Band performed three pieces opening with Sparkes’ ‘Invictus (The Unconquered)’.  A diverse piece, dedicated to various units of the US Army.  The first half concluded with ‘Big Band Bash’ proving that Eynsford can carry off that big band sound. 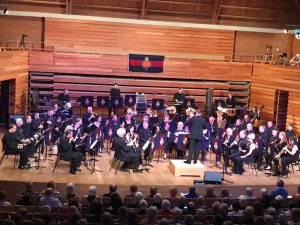 For the second half, the bands joined forces, producing a grand and rich sound.  Two students on clarinet from the Sevenoaks School also joined us.

We played pieces such as Deleruyelles “Fields of Honour” and Schonbergs’ “Bring Him Home” featuring the fine vocalist, Musician Robert Bowering from the Band of the Grenadier Guards. A little light touch was provided when the massed bands played a Beatles medley, well received by those old enough to remember them. 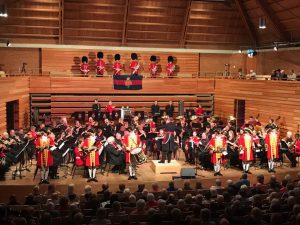 The audience had a surprise when the eighteenth century band from the Grenadier Guards came on stage in full heritage costume (most memorably their wigs and tights), and it’s wasn’t even panto season yet!  This enabled the audience to appreciate the different perspectives of Handels’ historic Royal Fireworks Suite.  The concert ended with a series of popular marches played by the massed bands 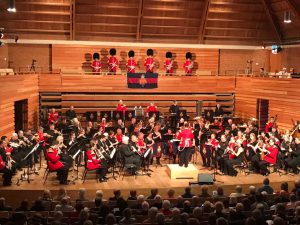 This was our fourth concert with the Band of the Grenadier Guards, enjoyed by players of both bands and our audience alike.  We hope to be performing together again soon, so watch this space!

Raising this amount in one concert is a fantastic achievement and we thank you all for your generous support.

Thanks also to Gill Monk for some great photos  ..as always!