Cruising the Fjords of Norway

Early August 2017 saw the band continue on its ‘European Tour’, taking a trip to Norway’s Majestic Fjordlands to entertain the passengers onboard Cruise & Maritime’s Columbus. 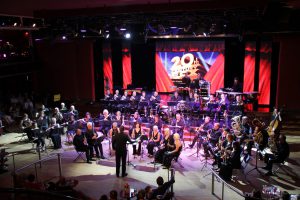 Our ‘Night at the Movies’ concert was enjoyed by an audience of all ages. Our music ranged from a medley of ‘Frozen’ songs to the ‘Dambusters Theme’ and ‘Finale from the William Tell Overture’, made famous by The Lone Ranger in 1956 (and the remake in 2013!) 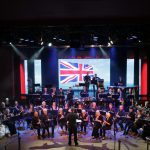 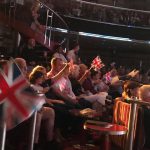 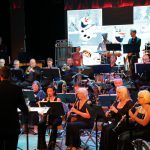 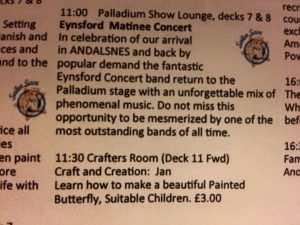 Our ‘Last Night at the Proms’ concert seemed to prove even more popular with our audience.  After moving the concert indoors due to poor weather, we played a variety of music, including the classics, Elgar’s Pomp and Circumstance and Fantasia on British Sea-Songs, featuring Thompson’s ‘Rule, Britania!’ which meant the audience could enjoy a good sing-along…we were even treated to a one-off performance by the cruise dance team who dressed as pirates and captured our very own Princess Ella during our performance of ‘Pirates of the Carribean’! 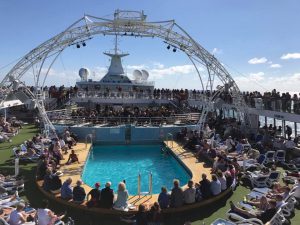 The band proved so popular with everyone on board that we were asked to do one last concert on the deck of the boat. Everyone was treated to beautiful sunny weather and sea breezes as we sailed across the North Sea. This performance recapped some of the audiences’ favourites from our previous performances on the ship along with a couple pieces we hadn’t played before. The band finished with an absolute bang with ‘Pomp and Circumstance’ which was conducted by a very special guest conductor, Tony, the Cruise Director who was just as surprised at his appearance as the audience were! 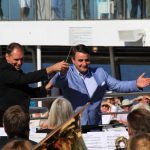 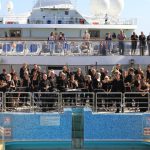 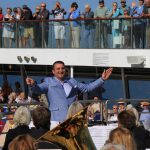 The band had an absolutely fantastic time on the cruise; we enjoyed performing as much as we loved seeing the beautiful Fjords of Norway (and the all inclusive drinks package!)

We’d like to thank all who came along to support us and, looking at some of the feedback we received below, we are thrilled that you seemed to enjoy it as much as we did!

We would like to thank you and your team for allowing us to join you on the cruise to the Norwegian Fjords.  We had a wonderful time and as expected your band was magnificent. It was good to see our next door neighbour -Alison Sutton- in action, and to sit and have a good chat with her that doesn’t often happen day to day at home.  We also were able to take a couple of excursions, which will also give us many happy memories.  My sister, brother , and friends in our group will also be remembering it for a long time.  Once again very many thanks

I just wanted to say how much I enjoyed the Eynsford Concert Band performances on board Columbus last week.

The cruise was wonderful, especially as we were spoilt with good weather, and the band performances made it an even more special experience.   The open air concert was tremendous.

Kind regards and best wishes to the band for their future performances,
Pat Cobley

Thanks for forwarding these to me. They are precious memories if the most enjoyable time I have had in ages. THANKYOU FOR MAKING IT ALL HAPPEN, and promise to include me if you ever decide to do it again.

Thanks for the great organisation of this trip, it was the first time we had been on a cruise and we now know we would like to do more in the future as it was an excellent trip. It must have been so rewarding to see how well the band was received by the cruise guests with a standing ovation for every performance, I would be shocked if CMV were not trying to get you on one of their cruises every year.

Thanks for doing such a great job.  We thoroughly enjoyed the trip.

Thanks to Ian and Steve for organising such a fantastic trip. It was thoroughly enjoyable and listening to the band was the icing on the cake.

We look forward to the next adventure.

Thank you very much indeed for arranging the cruise. I loved every minute, in  fact I’d be happy if the ship couldn’t leave Tilbury, provided that  off shore alcohol rules applied !

As long as the band plays, I’m more than happy to listen

Thanks once again,
Iris Gutteridge  xx

Thank you so much for all your organisation & hard work.I really enjoyed the cruise & loved seeing ECB perform.

It was great particularly on the outdoor concert to look around to see smiling faces & tapping feet – you should all be proud of yourselves.

Thank you so much, I had a fantastic holiday and enjoyed listening and watching the band you were amazing. Many thanks and kind regards,

We thoroughly enjoyed the trip!    Thank you so much for letting us come along!!!

I was brought up on Military, Naval and Marine bands as my Dad was a Surgeon Commander.     It’s great that one of the choirs I belong to since moving near to Portsmouth is accompanied by the Association of  Royal Marine Association Concert Band, who are great.

I have to say, though, that I prefer ECB!!!     All the concerts were fab, and I even snuck into a rehearsal or two as well!     Do keep us on your mailing list and we’d be up for any other trips, – especially cruises!.

I do hope you’re not all too shattered as I appreciate all the hard work you all put into organising and performing!

Take care, and thanks again.