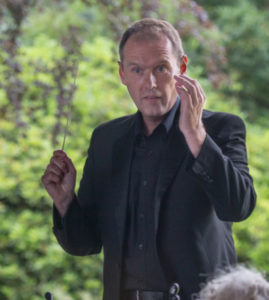 Mike Smith has enjoyed a professional career in music for over 35 years.

Born in Warwickshire, he studied clarinet and piano before joining the Army as a clarinettist, serving in England, Northern Ireland and Cyprus.

In 1993 he was selected to attend the three-year Bandmaster Course at The Royal Military School of Music, Kneller Hall.  He graduated in 1996 winning the Commandant’s Prize and the coveted Worshipful Company of Musician’s Medal for best all-round Student Bandmaster of the year whilst completing his Bachelor of Arts Degree and gaining his Licentiate of the Royal School of Music in Conducting.

As an Army Bandmaster he served with the Band of The Prince of Wales’s Division (Clive) based in Ternhill, Shropshire, which included overseas tours to Hawaii and South Africa, and the Band of the Grenadier Guards where in addition to taking part in all major State and Ceremonial Events he performed with the band on tours to America, Canada, Sweden and Australia.  He then returned to the Royal Military School of Music in the appointment of Training Design Warrant Officer.

In April 2008 he was selected for a commission into the Corps of Army Music and was appointed Director of Music The Band of The Royal Irish Regiment (TA) based in Holywood, Northern Ireland.  Whilst in Northern Ireland he also conducted both civilian Brass Bands and Symphonic Flute Ensembles at championship level.

On completion of his tour in Northern Ireland he was assigned as Project Officer, Headquarters Corps of Army Music before taking on the role of Director of Music The Band of the Corps of Royal Engineers in Chatham, Kent in October 2010.

After just 8 months with the Engineers Band he was asked to take up the much coveted appointment of Director of Music the Band of the Grenadier Guards.

In July 2013 Mike was assigned to Headquarters Corps of Army Music to fulfil staff officer appointments and then in 2015 he assumed the role of Chief Instructor, The Royal Military School of Music.

In March 2017 he had the honour and unique distinction of returning to the Grenadiers Band to be their Director of Music, an appointment which included responsibility for the music performed on the 2019 Queen’s Birthday Parade and tours of Spain, Belgium and Japan.

In April 2020 he was promoted to the rank of Lieutenant Colonel and assumed the appointment of Commanding Officer Regional Bands of the British Army based in Central London.

Outside of the military Mike is the Musical Director of the Kent based Eynsford Concert Band, leading them to be crowned National Concert Band Champions in 2014 and then to represent the UK in the European Wind Band Championships in 2016.