Saturday 10th October 2009 saw the world premier of Nigel Clarke’s ‘Heritage Suite (What Hope Saw)’ performed by the Eynsford Concert Band. The piece, based on a sculpture called ‘Hope’ by Sarah Cunnington in West Malling’s High Street was, rather aptly, performed for the first time in West Malling.

The beautiful 500 year-old Tithe Barn provided a a fantastic venue to tell a musical story of this beautiful Kentish town and was transformed into a concert hall for the 50-strong Eynsford Concert Band. Everything was enhanced for the occasion with the stone walls bathed in multi-coloured light, candle light and the ladies of the band in long evening dresses. 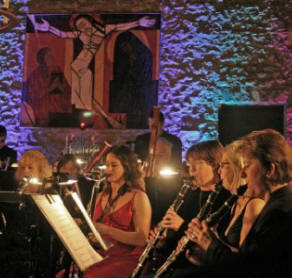 The concert featured a number of works by living British composers including ‘Albion Heritage’ by Philip Sparke and ‘Thames Journey’ by Nigel Hess. The highlight was; however, the first live performance of Nigel Clarke’s ‘Heritage Suite (What Hope Saw)’.

The band were privileged to be joined at the concert by both Nigel Clarke and Martin Westlake. Martin has written a poem about the story of the statue, which he read to set the scene. Nigel then introduced the work by providing an overview of the piece and his influences; from the bustle of the market square through to agriculture, hop picking, cricket and battle. Perhaps most fittingly, since the Barn is part of the nunnery that was founded nearly 1000 years ago, was the influence of the crusades and black death in the movement called ‘Prayers and Plagues’. 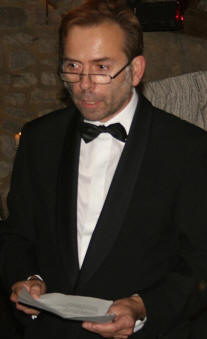 The Eynsford Concert Band is grateful to the Pilsdon Community for their hospitality and allowing us to use the Tithe Barn for the concert.

We would also like to reiterate our absolute thanks to Nigel Clarke for the many, many hours of work he has put in and allowing us the honour of performing the world premiere of his work. 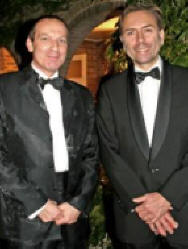